The flock of Skudde sheep arrive in Nida: Shepherds’ Residency at NAC begins 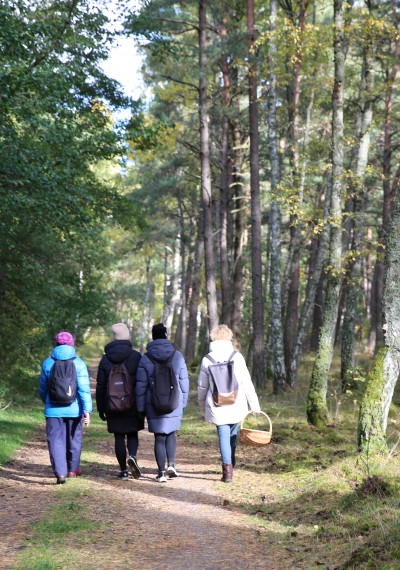 During the meeting with the shepherds Saturday, 19 October, colectivo amasijo and Milda Laužikaitė shared stories about the time they have spent together with the sheep and how that changed their relationship to nature. 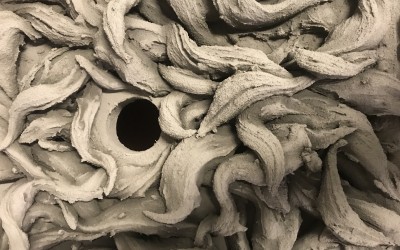 The Bird House in Making

The swallow / swift / bat house is in making at NAC by artist Anastasia Sosunova. 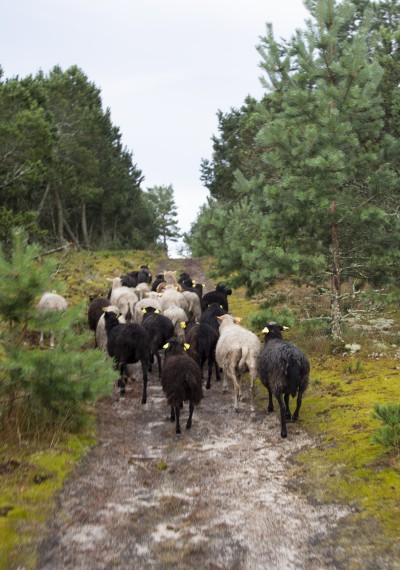 The new series of Neringa Forest Architecture Tours will take place on Saturdays at 12pm, starting from 16th October.

Summer begins at the Nida Art Colony of the Vilnius Academy of Arts (NAC) with a residency for shepherds lasting through October 2021. The project is implemented as part of the ongoing Neringa Forest Architecture (NFA) programme, developed within the framework of NERINGA - Lithuanian Capital of Culture 2021.

In cooperation with the Curonian Spit National Park and Verpėjos, the artist-run residency and project space in the Dzūkija, NAC has brought a flock of 30 Skudde sheep, owned by artist Laura Garbštiene (Verpėjos), from Dzūkija to Nida.

The idea to hold a residency for shepherds was initiated by Garbštiene as part of her participation in the Neringa Forest Architecture residency in autumn 2020. NFA follows the  material cycle of the Curonian Spit forests and analyses this cultural landscape as a case study in the context of Baltic and Scandinavian forests: as a space where ecological, recreational, representational, and industrial narratives intertwine.

Through NFA, NAC aims to develop tools and initiate processes to explore and give insight into society's relationship and cooperation with this unique landscape that has been shaped by human activity over the past 200 years. Following the current regulations of upkeeping a diversity of natural habitats in the Curonian Spit National Park, the meadows of Tylos valley and Grobštas Nature reserve in Nida are to be protected from overgrowth and are a particularly valuable habitat for meadow plants. The flock of Skudde breed sheep that will graze there is particularly suitable for landscape-shaping.

This collaborative project combines the objectives of several different institutions. Developed by using the sheep for the Curonian Spit National Park for nature conservation purposes, the shepherds’ residency is based on exploring the concept of artists working in the forest with sheep as a form of coexistence. Working with sheep in this landscape gives an opportunity for the artists to delve deeper into reflecting on the ongoing processes of how landscape, space, and nature are shaped and designed. The sheep will graze in the meadows that will not be reforested, thus inhabiting the landscape, grazing, and becoming new co-inhabitants in this protected structure of recreation, forestry, and cultural practices.

In order to cooperate with the local municipal agencies and the Curonian Spit National Park in initiating cultural projects that emphasise the need to create a new relationship with the environment, NAC launched an open call for the shepherds’ residency in spring 2020.  Three individual participants and one collective of two have been selected to take part in this programme. All of the participants are experienced shepherds and artists with backgrounds covering a broad spectrum of artistic practices. The selection was made by the NFA curatorial team, the artist Laura Garbštienė, and the artist and agroecologist Fernando Garcia-Dory who runs a shepherding school in Spain.

Throughout the residency period, public events organised by the shepherds-in-residency, Laura Garbštiene, and the NFA curatorial team will take place in order to enable the broader public to join the process of questioning this landscape with the support of the flock of sheep. A detailed programme will be announced on the NAC website and social media channels.

The first shepherdess is Milda Laužikaitė, living and working between Vilnius and Margionys village, Varėna district (LT). Laužikaitė has previously worked on farms and a wolf reservoir, and is familiar with animal life and needs, both domestic and wild. In performances and installations, as well as in musical creation, live improvisation is essential to Laužikaitė, as if the plan were a terrifying wall, stopping the spontaneous creative processes. This is why Laužikaitė's works always appear in collaboration with people, animals, plants, or rivers - those who are always in motion. During the residency Milda Laužikaitė will focus on interbeing with sheep, looking for ways she could  integrate her creative processes into a daily shepherding routine.

Kathryn Wood lives and works in the Peak District National Park (UK). She grew up on a hill farm and studied Fine Art at The Glasgow School of Art. Her family's farm works with native sheep and poultry, so ever since her childhood she has had hands-on experience shepherding her mother’s flock of sheep. Wood’s work focuses on an understanding of the rural as a place of cultural production. She explores traditional making methods using agricultural by-products from working farms. Wood applied to the residency as an opportunity to engage in the critical dialogue of shepherding within the unique backdrop of Neringa forests, which offer a chance to slow down and document the guardianship between animal and human within this landscape.

Dovilė Lapinskaitė lives and works between the Western Isles of Scotland, Newcastle (UK), and Lithuania. For the past two years, she has been involved in looking after a herd of 25 sheep that belong to artist and crofter Sallie Tyszo on the remote Isle of Lewis. In her work, Lapinskaitė focuses on LGBTQ+ archives, Queer diaspora, sexuality, and desire. The NAC residency is an exciting opportunity to explore her own connection with shepherding intertwined together with the experiences of her family and the nomadic lifestyle of the Outer Hebrides. During her residency she will invite participants to join her in the act of daydreaming, somewhere between fiction and reality.

colectivo amasijo emergedin 2019 in Mexico City, by a group of women from different professions and different territories: Veracruz, Oaxaca, State of Mexico and Mexico City. Their experience as shepherdesses began in Capulín (MX), doing research on communal lands and autonomy. The collective listens to the narratives that emerge from these actions as a mechanism to make visible the systems that perpetuate life. Their interest is to relate to projects that make visible the connection between daily practices, specifically those which regenerate and care for the territory. They do research in order to map and enact forms of life connected to wilderness, which allow non-hegemonic measurements of territorial degradation. Tamayo Museum, Kamias Trienal, and Casa Wabi are some of the cultural institutions with which they have collaborated. Currently colectivo amasijo is part of a research team for MoMA.

The project is co-funded by NERINGA - Lithuanian Capital of Culture 2021.